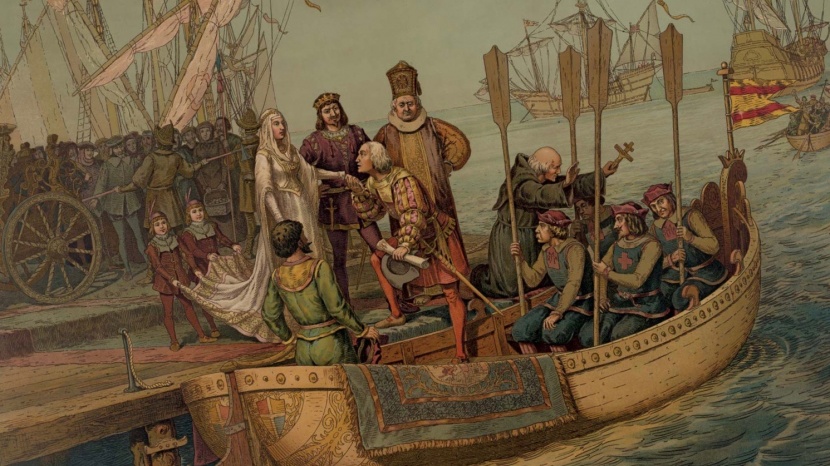 On Aug. 3rd, back in 1492, many worlds began to end and others began anew as Christopher Columbus set sail from Spain on his first voyage.

They spotted a “new world” later in October.

In March of 1493 Columbus returned back to Spain.

Upon his return, the Admiral of the Ocean Sea immediately wrote a letter announcing his discoveries to King Ferdinand and Queen Isabella, who had financed his trip:

“In the island, which I have said before was called Hispaniola (Spanish one), there are very lofty and beautiful mountains, great farms, groves and fields, most fertile both for cultivation and for pasturage, and well adapted for constructing buildings. The convenience of the harbors in this island, and the excellence of the rivers, in volume and salubrity, surpass human belief, unless on should see them. In it the trees, pasture-lands and fruits different much from those of Juana. Besides, this Hispana abounds in various kinds of species, gold and metals. The inhabitants . . . are all, as I said before, unprovided with any sort of iron, and they are destitute of arms, which are entirely unknown to them, and for which they are not adapted; not on account of any bodily deformity, for they are well made, but because they are timid and full of terror. . . . But when they see that they are safe, and all fear is banished, they are very guileless and honest, and very liberal of all they have. No one refuses the asker anything that he possesses; on the contrary they themselves invite us to ask for it. They manifest the greatest affection towards all of us, exchanging valuable things for trifles, content with the very least thing or nothing at all. . . . I gave them many beautiful and pleasing things, which I had brought with me, for no return whatever, in order to win their affection, and that they might become Christians and inclined to love our King and Queen and Princes and all the people of Spain; and that they might be eager to search for and gather and give to us what they abound in and we greatly need.”

Columbus is ever-present in NYC. New Yorker Washington Irving called him “The cornerstone of the history of the American continent.” In this image we see him at the center of it all: Columbus Circle in Manhattan. This is the place where distances to and from NYC are measured.