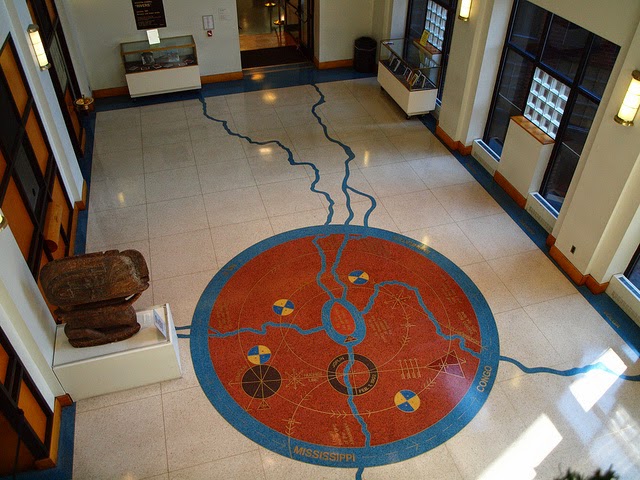 That “all men are created equal” is not a suggestion. It is a reality in the process of becoming. America works because we have a system that although established in an old paradigm, it organized the grounds for a true enlightened democracy.

Race continues to be a dividing factor. Since New York is the center of global culture let us explore how integration is manifested at the highest cultural levels.

Harlem in New York is the cultural capital for global citizens of African descent. Exploring this community we learn of amazing cultural contributions by people with roots in Africa. Exposure to these cultural programs create the neural template that can have us organize the neural pathways resulting in individuals who are in line with the ideals of true enlightened democracy.

Lets look at the Schomburg Center for Research in Black Culture located in Central Harlem. The floor in one of the lobbies on the first floor is decorated with a work of art. It’s called Rivers and was created by Houston Conwill: 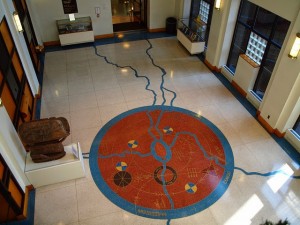 Rivers is a Cosmogram. A work that incorporates all in creation. It is inspired by Langston Hughes’s poem The Negro Speak of Rivers:


Click here to listen to Hughes reading his work

I’ve known rivers:
I’ve known rivers ancient as the world and older than the
flow of human blood in human veins.
My soul has grown deep like the rivers.
I bathed in the Euphrates when dawns were young.
I built my hut near the Congo and it lulled me to sleep.
I looked upon the Nile and raised the pyramids above it.
I heard the singing of the Mississippi when Abe Lincoln
went down to New Orleans, and I’ve seen its muddy
bosom turn all golden in the sunset.
I’ve known rivers:
Ancient, dusky rivers.
My soul has grown deep like the rivers.
Hughes realized his connection to all of creation. This state of consciousness can be described with a circle and a dot inside it. The circle is creation and the dot at the center is the individual consciousness in perfect harmony with what he or she has co-created. 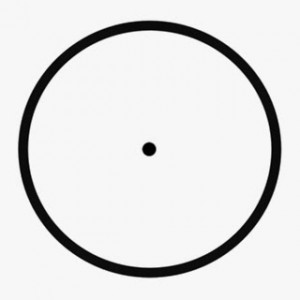 At the very center of Conwill’s work and directly below it are Langston’s cremains encased in a stainless steel book-like container. 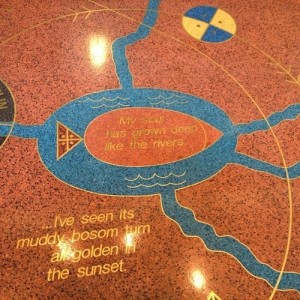 Right on 135th St. where the Shomburg Center is located, one block west, is Harlem’s Walk of Fame. Installed on the pavement are commemorative plaques that honor people of African descent who have helped advance culture for all people. One commemorates Langston Hughes.
His plaque is inscribed with another poem of his. 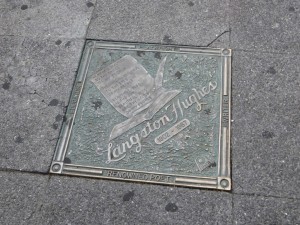 The night is beautiful.
So the faces of my people.
The stars are beautiful.
So the eyes of my people.
Beautiful also is the sun.
Beautiful also are the souls of my people.
This time he took celestial bodies and incorporated them into the essence of the human being. Humans are a reflection of the macrocosm in micro format. Realizing this aligns us so to manifest all the riches the universal force has in store for us.
Let the human spirit triumph!
Click here to share and like the Facebook page so to speed the process to our triumphant future!