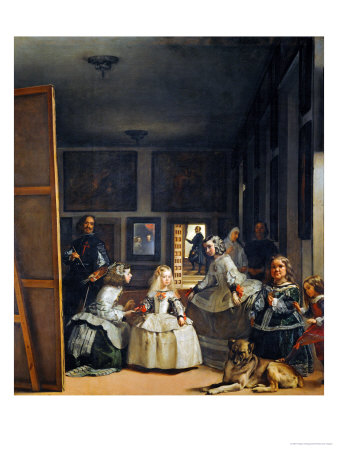 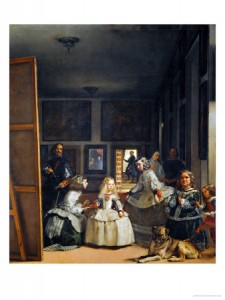 Las Meninas or The Maids of Honor, painted in 1656, is Diego Velázquez’s most celebrated painting. The protagonist of this scene is the Infanta (princess) Margarita, the daughter of the Spanish king Phillip IV. Her ladies in waiting are tending to her and to the left we see Velázquez himself in front of a canvas in the act of painting.
Opinions vary as to what Velázquez is painting. Some scholars suggest that this is a scene of Spanish court life where the infanta has arrived with her court to the worksite of Velázquez. Apparently the king and queen have just walked into the room and everyone in the room is acknowledging their presence. The images of the king and queen can be seen reflected in the mirror on the back wall.
Velázquez was aiming for something bigger than a strict representation of court life. It appears that we are watching this scene through the eyes of the king and queen. Looking at this painting from this perspective we can fantasize about Velázquez being our painter and the others present to be part of our court.
Buy This Poster